What Do You Mean, You’re A Witch?

People have always acted a little funny when I say I’m a witch. They either scoff as if I’m saying “I’m Harry Potter! I flew here on a Hippogriff!” or they recoil like I’m saying, “I’m going to lure your children into the woods and make them into a stew.” The truth is, witchcraft has always been the most pragmatic belief system to me. While every witch walks a different path, I am only going to talk about my own craft here.

While I put trust in Magick, I don’t actually think there’s anything magical about it. When I refer to ‘Magick’, I am referring to what some call “the secret”, “intuitive magnetism” or “the law of attraction”. Magick to me simply means setting an intention and willing it into existence – self-fulfilling prophecies. I’ve heard critics of witchcraft call things like tarot reading and spell work self-fulfilling prophecies as if that’s an insult. I personally put quite a bit of weight on them and have seen them work a million times over in my own life, whether or not I was practicing the craft at that time.

Example: In my early 20’s, I had a boyfriend I just adored. I was always terrified that I loved him more than he loved me, that I annoyed him, that I wasn’t good enough and that he’d cheat on me. Eventually, these fears and insecurities led me to behave like a clingy moron, and he eventually got bored and cheated on me. Could I tell the future? NO. I became that which I predicted. I fulfilled the destiny I saw. Everyone has this magick in them. We are performing it every single day, whether we believe it or not. Our intentions become thought, which becomes word and action – that’s just how humans work. That is not to say that people ONLY get what they deserve. Bad things happen to good people every day, and witchcraft has definitely helped me get through traumas I do not believe I brought upon myself as well.

Are You A Good Witch, Or A Bad Witch?

Witchcraft has definitely become more popular over the last couple of years, resulting in more “brands” of witchcraft than ever before. There are kitchen witches and hedge witches and witches that believe in faeries and green gods. My personal brand of witchcraft incorporates pieces of other religions and ideas I’ve been taught by people from all over the world. I don’t identify as Wiccan or Pagan, though I do observe some of the same holidays. I don’t commune with spirits or hold seances – though I wish I could. I’m what they call a ‘Solitary Witch’, who practices mostly in private, and doesn’t belong to a sect, society or coven, though I do occasionally practice with other witches I am close with. I also identify as a ‘Grey Witch’ aka a ‘Neutral Witch’, which is defined as “a practitioner of magic(k) that does not harm nor benefit others. Gray magic(k) witches will mostly benefit and harm at the same time, creating a neutral or balanced effect.” – My interpretation is to expose the truth and lift myself and beings I come in contact with to their highest potential. If that includes spell work that will expose a sexual predator or get a thief caught, so be it. The spell work I do is mostly shadow work. That is, resolving my own deep psychological shit. Though I do occasional spell work that involves conjuring or hexing, I would never will physical harm to another living being. My personal craft involves a lot of meditation, writing, and ritual work. 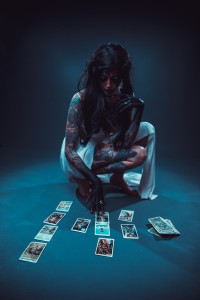 When I say “ritual”, I don’t mean sacrificing goats, I mean having a mindful and sacred skin care routine to wash each day off and start anew. I mean sitting still with myself when my heart may feel pangs of jealousy or “not-enoughness”, repeating my mantra – In perfect love, in perfect trust. I mean savoring food – acknowledging every step that goes into its preparation from the sun, soil and water that created it, to the farmers, truckers, store employees who made it accessible, and whoever cleaned, cooked and plated it for me to eat. I mean spending time with nature, gardening when possible and getting to know/respecting the Genius Loci of the spaces I visit and inhabit. I mean cleansing my spaces with sage and palo santo, reading tarot, and taking time in each moon cycle to look at the big picture. I mean allowing myself to be quiet and still, observe people and places, and listen closely to my intuition. 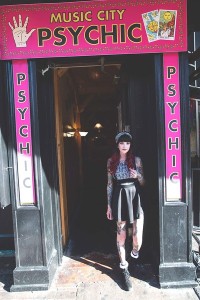 Speaking of intuition, one of the biggest reactions I get when I talk witchcraft and tarot, is “so, you think you can read minds or tell the future?” Let me clear this up here: No, I do not (though I did once get hired on-site at a tarot studio by a psychic without even interviewing – I did not take the job). What I CAN do is use my finely tuned empathy and intuition to interpret one’s tarot to make it applicable to their life and situation. I do believe in tarot, I don’t believe it’s magic. I believe in it because it has the ability to show you a perspective you are often trying hard not to see. It forces you to look at things through a different lens. Tarot is like a good friend that’s willing to play devils advocate and practice tough love if it means getting you through a bad situation. I read my own tarot all the time, and often have to face hard truths. Do I think it determines my future, no. Has it forced me to take a second look at relationships, ultimately terminating them and changing the course of my future? You bet your sweet ass it has.

There are a million and one schools of thought where spell-work is concerned. So much of witchcraft has been bastardized and contrived by Hollywood, It almost feels silly going into spell-work. Everyone already has pre-conceived notions of what it looks like, but I’m going to try to ignore those tropes. Some witches only believe in casting positive spells. Others, like myself, work with both light and dark magick. Just as tarot doesn’t magically read someone’s future, spells don’t magically work, either (enter the difference between Magick and Magic) Spell work can be seen as a funnel for focus. Every witch will tell you, spells mean nothing if they aren’t coupled with intent. That is to say, if you’re going to do a spell to conjure money, you better be prepared to take a second job. Some people I know practice the law of attraction or the secret; this is essentially spell-work. It is putting what you need to be your highest or best self into the universe, speaking your intentions to make it so, opening yourself up to any opportunity that may lead to the desired result, and then following through. Again, spellwork can be boiled down to thoughts>intentions>words>actions.

In the end, whether you’re praying to one of the hundreds of millions of gods people pray to, speaking to the universe, casting spells, or simply working hard to reach your goals, intent, and follow-through is key. Witchcraft has been a part of my life for 20 years, and the way I practice is ever-evolving. The beautiful thing about witchcraft is that it’s available to everyone, and the ways to practice are limitless.

Do you practice witchcraft and have anything to add? Are you curious but don’t know where to start? Do you want to geek about tarot, or book a reading? Will you teach me about crystals? Leave it all in the comments!